A webhook is a concept of API (Application programmer interface) and is also called a web callback or HTTP push API and is used for providing web applications with real-time information from the internet. A webhook gets the data from the internet and other secondary sources and provides the websites or web applications that data. Webhooks ensure web applications get immediate data. A webhook also works more efficiently when compared to other APIs as they are more coherent and work more seamlessly. This makes the web applications and sites to be more real-time and ensures stability. They are also sometimes called ‘reverse APIs’ as sometimes we need to design APIs ourselves for initiating webhooks. This article is all about secure webhook access, which is an intricate process, and many people consider the only drawback of webhooks which is the initial setup of such webhooks.

Webhooks are a tool for the communication of web applications over the internet. They work using a web URL that is different for each app and webhook. This allows the communication patterns and hence provides a medium for communication. These web URLs acts as keys and numbers for a certain web application, and other web applications can call or notify for communication. The exchange of data also happens via these webhooks using web URLs. When a webhook is called or used, one system issues the calls and initiates the webhook via the web URL, and the underline system comes into action. It passes through the APIs and the HTTP protocol and then reaches the second system. Rivalime is bringing the latest, AI-related, and top-tier data center security consulting & solutions. Certified personals supervise our easy to deploy firewalls and customizable, layered security programs.

As discussed above, webhooks are methods for communicating web applications with each and the sharing of data; for example, GitHub sends a post request to the developer’s URL to inform a new pull request is opened. Hence, it becomes essential to secure and protect a webhook. However, securing a webhook is trickier and more different than securing an API as a webhook works via the web URLs, which are publicly accessible to everyone on the internet. It is important to ensure that whenever a web server receives a request, it is from the expected user and not some unexpected source. If it is not ensured, any person on the internet can send a fake signal or request using the web URL and attack the web application’s integrity. As of now, there are no such methods that are deemed as the best methods to secure webhook access, but the following are some of the practices majorly being exercised in the market:

Signatures are also another common solution that is implemented for secure webhook access. This process is implemented in an order which is explained below:

This is a comparatively secure and safer method, but if the signature is somehow misplaced or compromised, it can also cause damaging problems.

There is a significant issue in implementing verification tokens, and signatures for secure webhook access. Both the verification token and the signatures are done by the developers themselves and require code to be written by the developing team. There is no way of practically ensuring that it is done correctly or webhook requests are being verified correctly or not. Any mistake on the developer’s side can further cause issues. Another simple method to this is using tiny payloads. This method requires sending tiny payloads to the client or the server upon the occurrence of any event. It will then further send requests to the corresponding APIs for the initialization of the full event and, in this way, ensure correct secure webhook access. The benefit of this approach is that regardless of whether authentication is performed, the full event is only received by the application when they send a regular authentication request to some web API.

Encrypting all the Data 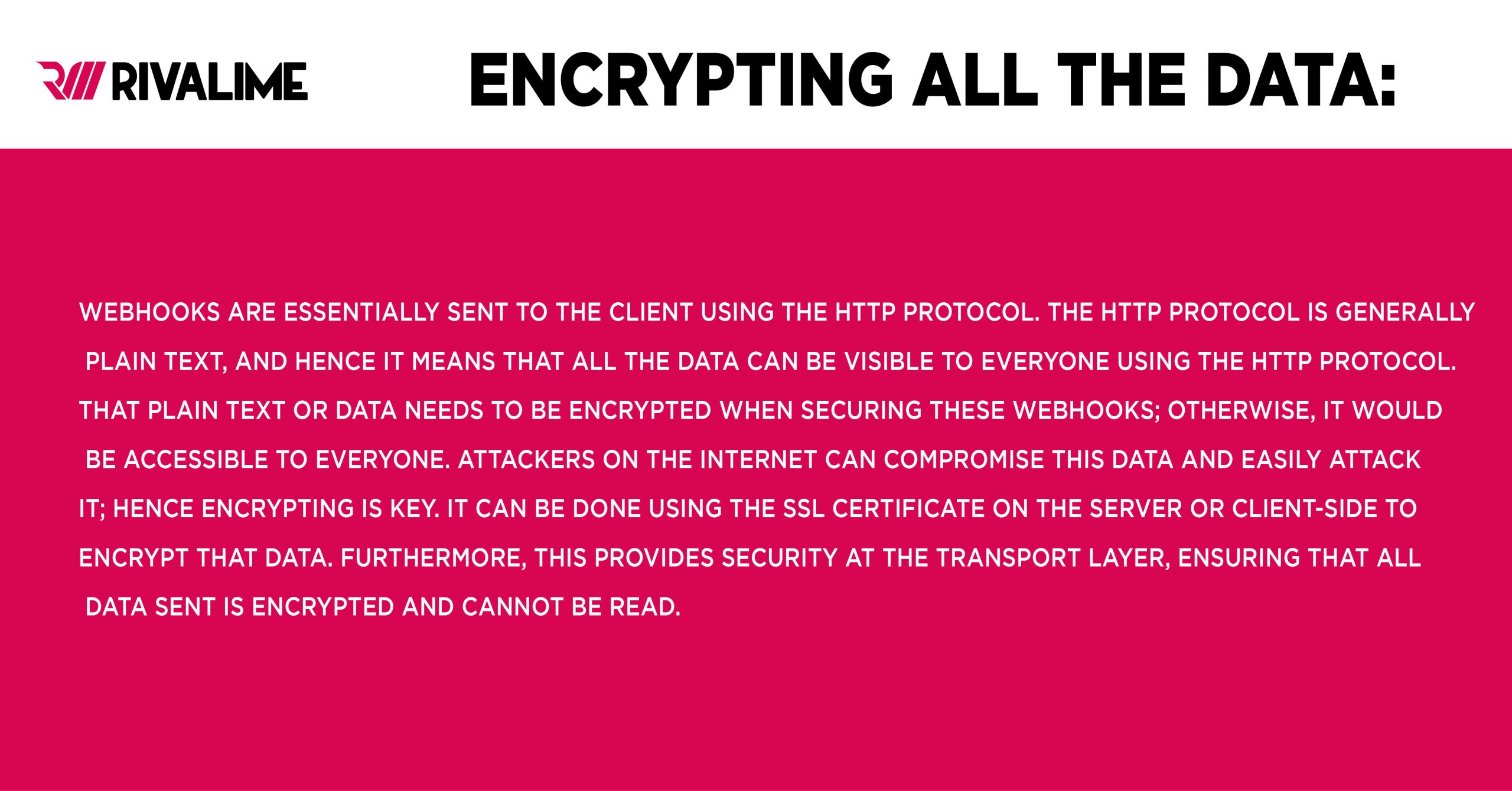 Webhooks are essentially sent to the client using the HTTP protocol. The HTTP protocol is generally plain text, and hence it means that all the data can be visible to everyone using the HTTP protocol. That plain text or data needs to be encrypted when securing these webhooks; otherwise, it would be accessible to everyone. Attackers on the internet can compromise this data and easily attack it; hence encrypting is key. It can be done using the SSL certificate on the server or client-side to encrypt that data. Furthermore, this provides security at the transport layer, ensuring that all data sent is encrypted and cannot be read.

Webhooks are a very useful tool in developing web apps and websites. Many of the developing teams use this concept to better integrate their resources and communicate these web apps on the internet. Companies like Google, GitHub, etc., frequently use webhooks. It is, however, essential to secure webhook access and should be prioritized and improved over time.