Securing data and confidential information is and always be a foremost responsibility of an individual or an organization. Constant attacks and data breaches by anonymous users have left a wrong impression on the organization’s reputation.

Recent data breaches have made users and organizations more worried and concerned about the repercussions they have to face if their data is stolen. Recently, software’s most likely web applications include storing and handling highly sensitive data.

In this modern era, any new development comes with multiple challenges, and in these challenges, making your data secure and preventing it from falling into the wrong hands is the prime target of the developer or the organization.

Securing code reviews and practices are essential for security purposes, but these efforts might not be enough to ensure the safety of the software developed in recent times. They need to take immediate action for security reasons and identify such vulnerabilities. 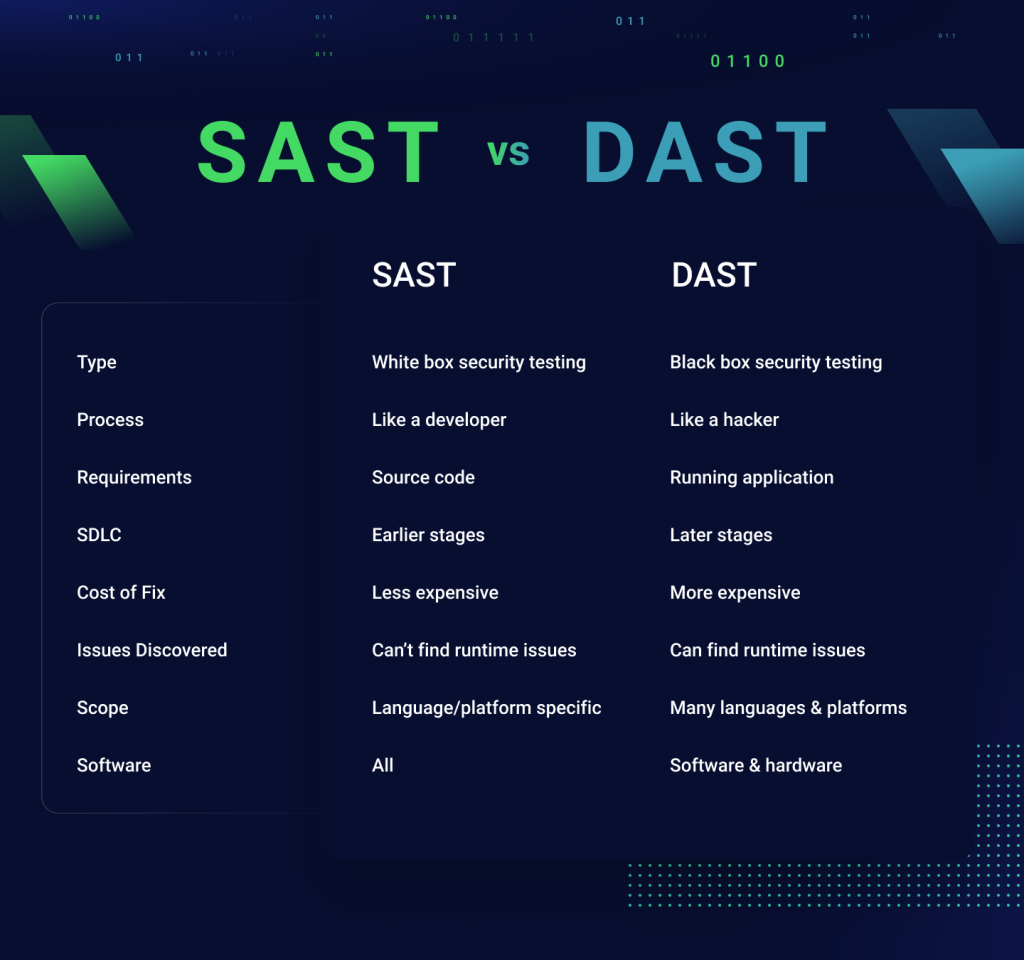 This article will find two testing methods that will help the testers and developers find vulnerabilities at various stages related to the Software Development Cycle. The addition of application security testing (SAST and DAST) will help the developer look for threats.

Static Application Security Testing uses a white-box testing approach to mitigate risks and vulnerabilities. In white-box testing, the application’s source code is provided to the tester. SAST tool is designed to analyze the source code and point out the possible issues at the development stage.

SAST tool can finish the job much quicker than reviewing code manually. Let us take an example of reviewing 50,000 lines of code; it would take a few minutes for the tool to analyze and find the errors, while for the human, it would take several days’ most likely months.

Evaluations can be performed without a running system in static application security testing. Software flaws and SQL injection weaknesses are most probably detected during this mode of SAST testing. Finding vulnerabilities at an early stage is cost-effective and also saves time.

A significant attribute of this SAST tool is that it can find the exact location of the vulnerability in the code because of its configuration files and deep understanding of the code.

The development of unique testing tools like SAST comes with various benefits for the testers. But you will also get to face some limitations. Logical vulnerabilities are untraceable by the SAST tool and can only be identified by some other means of testing.

The tool might face some trouble while testing a large codebase by producing a high number of false negatives and false positives. This kind of testing is carried out during the development stage, due to which it cannot detect runtime errors.

Talking about the SAST vs DAST Testing, let’s move on to the next candidate!

Dynamic Application Security Testing uses a black-box testing approach to find vulnerabilities in software applications. In this testing approach, the tester is not provided with the source code.

Instead, they perform web application tests from outside like a penetration test. This form of testing is conducted to observe the response of the application in case if a hacker attacks it. Evaluations can be performed with a running system in dynamic application security testing.

DAST can determine various security vulnerabilities that link with the operational deployment of software.

However, as DAST does not have access to the source code, it cannot point to the exact location of the vulnerability in the code; during the scanning phase, the tool may send some kind of attacks that may delete or modify existing data the application. A non-production environment is an excellent approach to run all the tests.

What Is the Difference Between DAST and SAST?

The difference between DAST and SAST is the most repeated question that you have heard in majority organizations or their discussion about the pros and cons of these testing techniques.

A whole debate of choosing the best among SAST vs. DAST concludes that both testing approaches are different and provide you with different functionalities. SAST is performed during the development stage having access to the source code.

At the same time, DAST is performed on a running application without getting access to the source code. Therefore, you should include both testing techniques while testing your application for ease and safety.

Why Choose SAST vs. DAST Testing?

Why Choose DAST vs SAST?

Each testing technique is different and provides additional benefits to the tester. Both DAST and SAST approaches must be used together to find the vulnerabilities in a software application.

However, one technique is not better than the other, for which you have to use both of them to pass the comprehensive security test. Combining these tools, SAST and DAST will minimize the risk of vulnerabilities in applications.

These tools are not a replacement for the traditional secure coding practices; instead, these tools, along with the previous security practices, will minimize the security concerns.