An intrusion detection system (IDS) is an important network security tool that can help companies safeguard their networks and data from hackers. IDS examines incoming network traffic and suspicious activity to detect possible intrusions. When an intrusion is detected, the IDS will send an alert, which will notify the security team of the event. The intrusion detection system is software that is only used to monitor the network for any suspicious activities or policy violations.

They’re the most popular anti-hacker software, but they’ve got several other uses. Many companies use intrusion detection systems to alert them to suspicious activity on their networks and protect sensitive data. Most work this way: Whenever something goes wrong in the network, their system alerts the appropriate security personnel. Some designs have more advanced functions than a just warning, though and also let you investigate whatever’s happening on your network by tracking and logging each action that occurs.

Intrusion detection and prevention system services are an essential part of security management. An IDS monitors, inspect, and analyses the incoming traffic to your network. Tracking the traffic can discern whether the data sent consists of intrusive packets or not. The network intrusion detection system is a security application that monitors network traffic for suspicious activity and reports any malicious activity.

These are commonly used for logging policy violations or misuse of data in an organisation. They break down each event into actionable steps and then show you how you can take these actions to resolve or block the problem from happening again – or, if it’s already happened, what your options are to respond (i.e., log an incident, alert someone else, change passwords etc.)

Types of the Intrusion Detection System in Network Security

There are four types of IDS: These types are used in enterprise networks and are critical components of a comprehensive security strategy.

It is software that monitors host logs, operating system events, and running processes. The HIDS agent is installed on each host, and it monitors the host logs, available system events, and running processes. The HIDS agent runs locally on the host and is responsible for generating the audit trails and logs. Suppose the HIDS agent detects a security breach. In that case, it sends those audit trails to the HIDS server, which analyses them using predefined rules (baseline configurations), determines whether any malicious activity has occurred, and takes necessary actions if a threat has been detected.

Host-based IDS monitors the activity on a specific device or system that is connected to a network. It looks for suspicious activity such as unauthorised access or modification of files and applications on a computer, server, or another device. While it cannot protect an entire network, it can help protect specific devices and systems on a network from malicious activity. 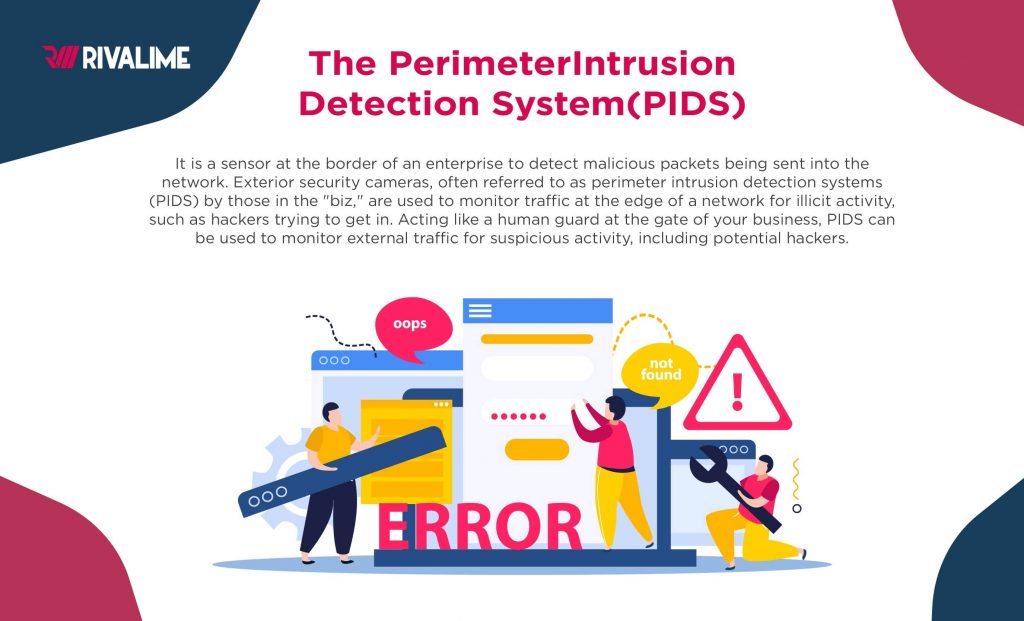 It is a sensor at the border of an enterprise to detect malicious packets being sent into the network. Exterior security cameras, often referred to as perimeter intrusion detection systems (PIDS) by those in the “biz,” are used to monitor traffic at the edge of a network for illicit activity, such as hackers trying to get in. Acting like a human guard at the gate of your business, PIDS can be used to monitor external traffic for suspicious activity, including potential hackers. Think of perimeter intrusion detection systems like an over-the-top version of your home’s exterior security cameras: They help keep bad guys from getting in and wreaking havoc on your network and databases.

A VM-based intrusion detection system (IDS) is a security tool that uses a virtual machine to detect signs of malicious activity in an environment. The IDS can scan for signs of attack without inserting extra traffic into the network or relying solely on information from network packets by working through a VM.

This type of IDS can also help with intrusion prevention, depending on how it’s configured in terms of software and platform. Uses lightweight agents and monitors only relevant information from the host and VM communication interface.

The network intrusion detection system can be used to detect vulnerability exploits against a target host or hosts. Network intrusion detection systems (NIDS) are used to detect and log network attacks in real-time. They are the network version of an intrusion detection system, which monitors an entire network’s traffic rather than on a per-host basis. NIDS typically work by examining both the header and payload of packets that pass through a given network interface, then comparing them against predefined rules that specify what constitutes suspicious activity. If a given box matches one or more of these rules, the NIDS will note it in a log file, send an alert via email or SNMP trap, or take some other action. It monitors traffic across a network.

It looks for suspicious activity such as packets sent to an unauthorised destination or packets sent with incorrect information, such as headers that are not valid for the intended recipient. While it cannot protect individual devices or systems on a network, it can provide visibility into the behaviour of all traffic across an entire network. It can identify suspicious activities on any device or system connected to that network.