If you want to connect two networks, a gateway is a node you need. It serves as a portal. Alternatively, gateways act as points of entry and exit for network traffic. Intra-LAN traffic, however, is an exception to this norm and does not go via the gateway at all (LAN).

Because of the network’s borders, it is not always feasible to communicate directly with other devices, nodes, or networks connected to the network.

A gateway is required to maintain an external connection as long as the network demands it. An internet gateway combines the functions of a modem and a router into a single unit.

Through the usage of this service, customers may log in to all of their companies’ and services’ online and virtual software applications with a single sign-on and distribute the load over several servers.

Given the usage of the name “gateway,” it would be natural to expect it to have all of the gateway’s features, such as load balancing, enhanced security, site filtering rules for Internet users, and user activity analytics.

In order to use Citrix Secure Private Access and other add-ons, however, you need to install them first.

Citrix secure access gateway provides a single sign-on for all applications, whether hosted on-premises, in the cloud or as SaaS offerings. Users may access any app, on any device, from any location using a single URL.

Several Citrix secure access gateway appliances may be used for more complex configurations in your network.

By using Citrix secure access gateway virtual servers, users may access any service they want. Since several virtual servers may be deployed on a single Citrix secure access gateway device, it can serve multiple user communities with varying authentication and resource access requirements. This section covers the topics of authentication, authorization, and accounting.

Access to the Citrix secure access gateway may be done in one of the following three ways:

The gateway plug-in is installed on the user’s device as soon as the Citrix Workspace app is installed.

Apps and virtual desktops published on a server farm may be accessed by users through the Workspace app and the Web Interface.

The web address of the Citrix secure access gateway may be used to connect Android phones and tablets. When a user opens an app, a Micro VPN is utilized to divert network traffic to the internal network.

The DNS settings of the Citrix secure access gateway must be specified if Android users are connected. Learn how to support DNS queries on your Android phone or tablet using DNS Suffixes. 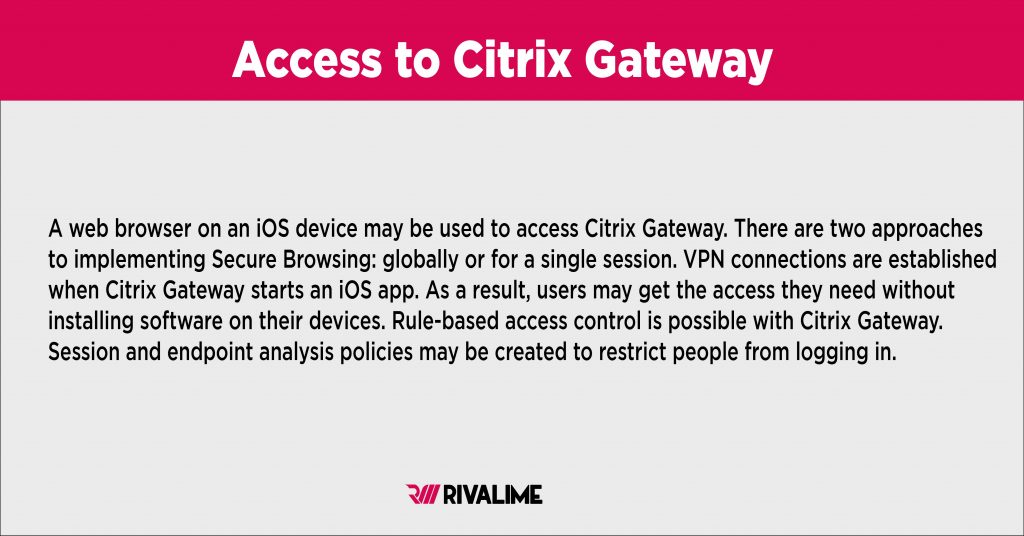 A web browser on an iOS device may be used to access Citrix Gateway. There are two approaches to implementing Secure Browsing: globally or for a single session. VPN connections are established when Citrix Gateway starts an iOS app.

As a result, users may get the access they need without installing software on their devices. Rule-based access control is possible with Citrix Gateway. Session and endpoint analysis policies may be created to restrict people from logging in.

A network adapter is installed on the user device to transfer communication that is not meant for the internal network. Public and private networks (LANs) are always connected and operational. If split tunneling is deactivated, connections to virtual adapters will go via the virtual adapter.

Utilize a Mobile Device Powered by iOS or Android

Users may access Secure Hub from their mobile devices using the app available for iOS and Android. He/she may log in to their email and website with the help of Secure Mail and WorxWeb. Citrix secure gateway redirects mobile device connections to enterprise services.

For iOS users, you may enable Secure Browsing as part of the session profile. It is impossible to connect without the Micro VPN on Android. Using Micro VPN, the Citrix secure access gateway connects to Secure Mail and WorxWeb. Micro VPN is not required for Citrix Gateway.

As many as 10,000 concurrent users may be served by Citrix’s Access Gateway 10000 series equipment. With the Citrix Access Gateway, several virtual private networks are no longer necessary (VPNs).

The usage of a second virtual private network (VPN) in combination with Secure Gateway raises the total cost and complexity of the system. Access Gateway is one SSL VPN that solves all of your company’s remote access problems.